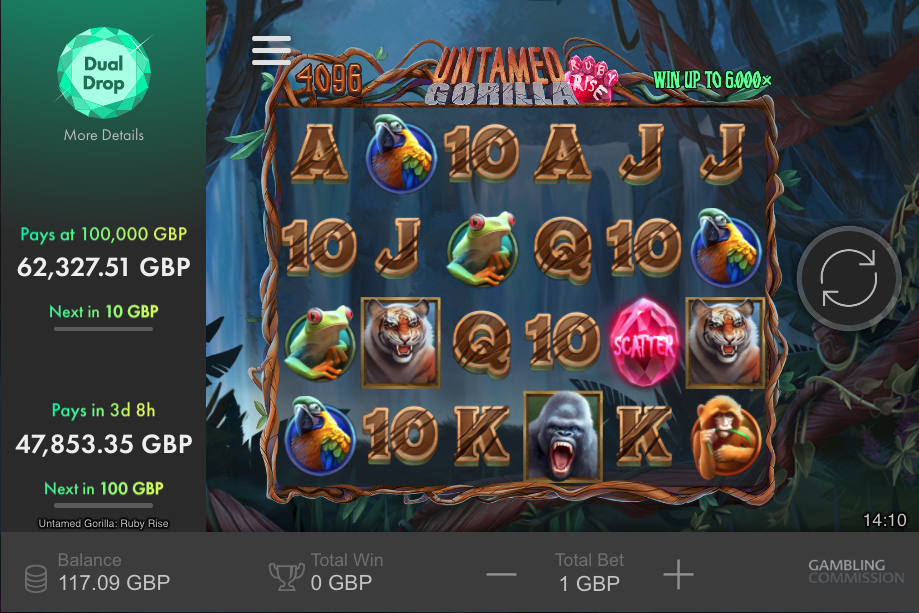 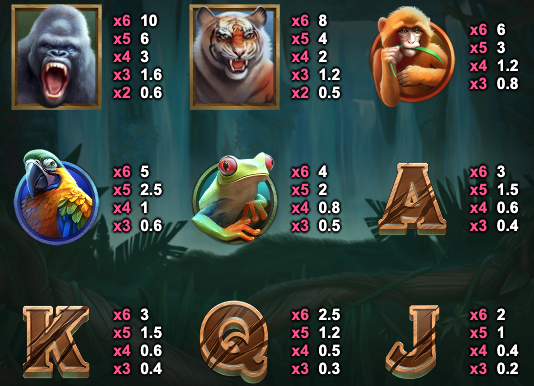 Tribal drums and precious gems await anyone brave enough to venture into the jungle in search of this online slot from Bet365 Originals; it’s called Untamed Gorilla: Ruby Rise and along with plenty of free spins there are two Dual Drop progressive jackpots to be won.

Untamed Gorilla: Ruby Rise is a six reel slot with four rows and 4096 ways to win; there are some great rhythmic sound effects to accompany the gameplay which takes place in a gloomy jungle setting in which the flora barely moves in front of a dramatic waterfall.

The higher value symbols include the gorilla, the tiger, the monkey, the parrot and the frog; 10, J, Q, K and A represent the lower values. There’s no wild symbol in the base game but the large ruby is the scatter symbol.

Landing three or more scattered ruins anywhere in view will activate this feature in the following way:

There are five levels in total and they work like this:

Landing two, three, four or five scatters in one spin will award an extra 3, 8, 12 or 16 free spins respectively.

Dual Drop is bet365s very own progressive jackpot and it consists of two prizes, the Weekly and the Community Jackpots:

These prizes can be won on any winning or losing spin at those times but you’ll only eligible for the big bucks if you’ve spent £10 or £100 on the Weekly or Community jackpot slots. You can increase your chances by earning more tickets each time you spend another £10 in the Community Jackpot and £100 in the Weekly Jackpot.